How do you like your coffee… fruity or nutty? Or maybe with a hint of chocolate?

When you buy really good coffee beans they usually have a description of the flavours on the packet. Or maybe you have seen the flavour notes on a chalkboard at your favourite cafe. In this example, the flavours of naturally processed beans from Keoset in Xieng Khouang are described as “Jasmin tea, pear, brown sugar, chocolate”.

Those flavors are a result of many factors: the variety of coffee, where it was planted, and how it was processed. Changing the processing technique will change the flavor, and both of the main buyers for Keoset coffee have been experimenting with new processing methods in recent months.

You can find out more by clicking on the pictures below and visiting the Facebook pages of Mueang Xieng Coffee and Comma Coffee.

In cooperation with the LURAS project, Comma Coffee has been testing new processing techniques with the coffee farmers in Keoset. The company has guaranteed the price they will pay for the beans, which means there is no loss for the farmers if the experiments fail. Samples from these experiments show that the farmers are able to produce exciting new flavours in their beans. If they are also able to maintain a consistent high quality they can be sure of a good income in the future.

The Vientiane Times today published a full page story about coffee farming in Keoset, focussing on the experience of Ms Seaumkham Lertmanyphan.

The newspaper reported that Seaukham, who is 26 years old, “harvested her first crop two years ago, obtaining a yield of two tonnes which she sold for over 10 million kip”.

More than 1,000 copies of the The Lao Coffee Notebook were distributed in Luang Prabang and Vientiane during the events held to celebrate International Coffee Day this month.

LURAS and Comma, the producers of the Notebook, received many requests for an English version… and here it is! Click on the cover to download the pdf file (5 MB)

The Lao Coffee Notebook is now available! Produced by LURAS in cooperation with Comma Coffee, this unique notebook is packed with information about coffee production, processing roasting and brewing, including a map, statistics and a Lao-English wordlist, all of which has been beautifully illustrated by Tina at Helvetas. Here is a selection of the pages …

You can get your copy of the notebook for free from the LURAS-Keoset booth at International Coffee Day or at Comma Coffee. These files can also be used for educational purposes in your own organisation or project, but please credit LURAS & Comma.

International Coffee Day will be celebrated 2nd-4th October in Luang Prabang. The Kesoset Coffee Farmers will have a booth at the Heuan Chan Heritage House… so come along and meet them! Details of the event are here and here.

We are promoting the importance of Partnerships for Sustainability. At the booth in Luang Prabang you will be able to meet with coffee farmers, discuss with staff of the Lao Upland Rural Advisory Service, and discover the coffee products sold by our commercial partners, Comma Coffee and Mueang Xieng Coffee.

There will also be a free gift for you to take away… come a see what it is!

With the latest coffee harvest coming to an end in the Keoset Cluster of villages, the Lao Upland Rural Advisory Service (LURAS) has summarised some of lessons that are being learned.  This presentation was made at meetings of the Lao Coffee Board and the Working Group on Farmers and Agribusiness.

Located in the Northern Uplands of Laos, Xieng Khouang Province is a land rich in natural resources and ethnic diversity. The Keoset cluster of villages is home to 200 families who have been growing coffee for more than a decade. 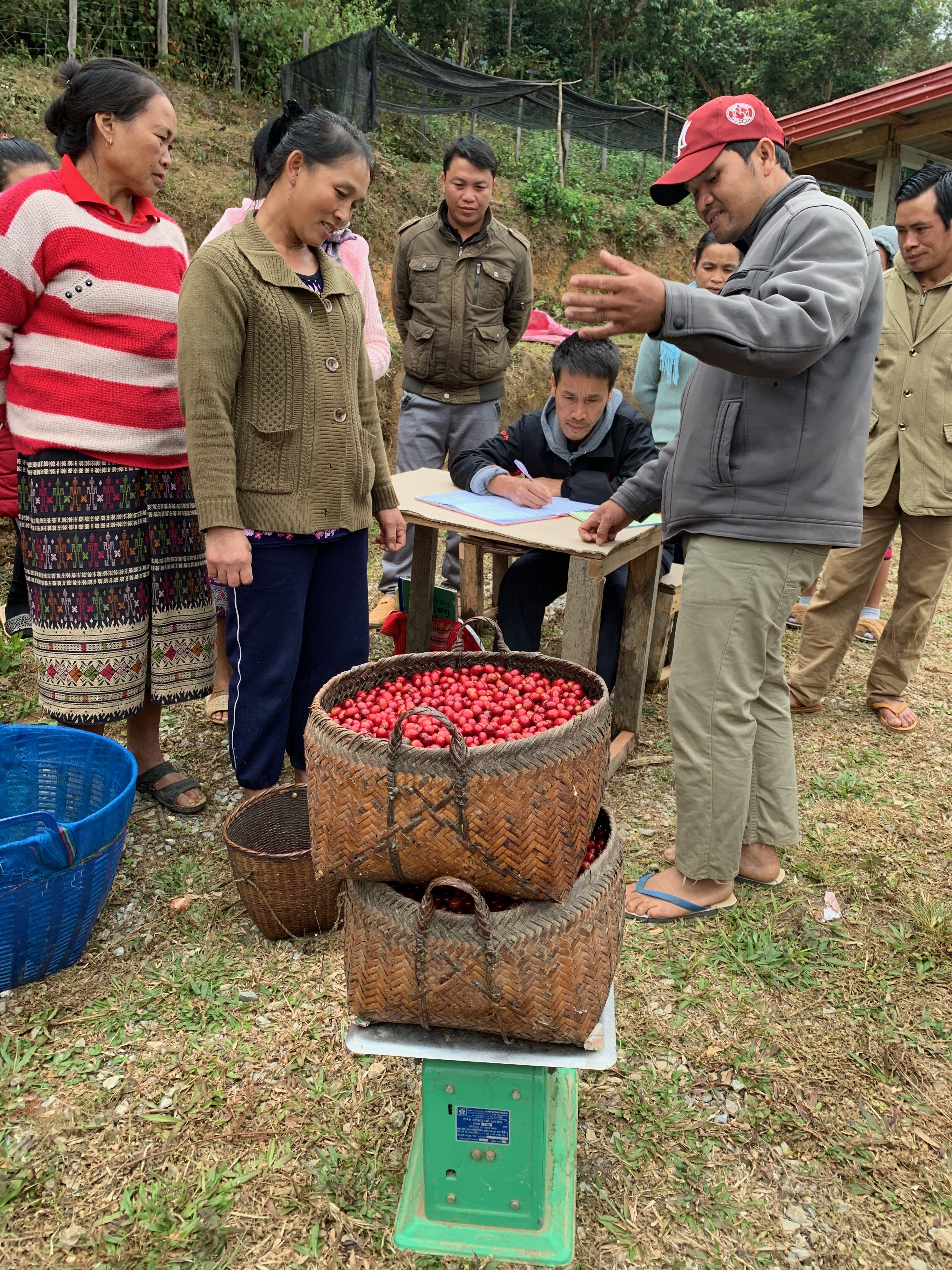 The specific climate and geography of Xieng Khouang provides suitable conditions to produce high-quality Arabica coffee.  The farmers of Keoset have planted their coffee in natural forest at elevations between  1,100 and 1,400 metres. Recently they have been cooperating with the Lao Upland Rural Advisory Service to improve both the quality and quantity of their coffee beans.

The coffee is cultivated without chemical fertilizers or pesticides. Cherries are harvested between November and February and turned into green beans using both washed and natural processing techniques. The entire process is respectful of local culture, biodiversity and people’s health.

After roasting by one of the companies paying a premium price for beans from Keoset (see our Partners page for details), this quality  coffee is ready for consumers who like to drink something special!

Lao coffee has 100 years of history. The following information comes from the website of the Lao Coffee Association:

The first coffee plantations in the Bolaven Plateau were set up around 1920 by French settlers alongside the roads built by the colonial administration. Coffee rapidly became the main crop in the area, especially after the construction of a research center near Paksong in 1930.  At that time, settlers grew exclusively arabica trees of Bourbon and Typica varieties.  The coffee obtained was then mainly exported to France with a very high-quality image.

From 1950 onwards, several external factors triggered a decline of the coffee sector in Laos. First, there was the dismantling of coffee marketing network when planters, investors and traders fled the area because of the recurrent conflicts. At the same time, colonial arabica plantations were being severely damaged by recurrent frosts and more particularly by leaf rust disease attacks which led to the progressive replacement of Arabica trees with newly introduced species, mainly Robusta.

After 1975 and the end of the war, native farmers as well as new settlers from the lowlands started to reoccupy the abandoned lands in the Boloven Plateau. At the same time, the government program of collectivization included the creation of coffee production and trading cooperatives with trading and exporting controlled by national authorities.

Market liberalization and the resurgence of Arabica (1990-2007)

In the late 80’s, under the New Economic Mechanism regime (NEM), the coffee sector was progressively liberalized and private operators started to play an important role once again. The sector was given a boost in the 90’s due to frosts in Brazil – the leading coffee producing country – and the devaluation of Lao Kip against the US dollar.

Created in 2007 with the support of the Lao government and the French Development Agency (AFD), the “Bolaven Plateau Coffee Producers Cooperative” or CPC (formerly known as AGPC) consists of about 1,855 coffee growing households spread in 55 villages.  In 2012, CPC exported 603 tons of green coffee and was recognized as “Laos Best coffee exporter” based on price and quality. The organization is now continuing to grow, with exports exceeding  1,000 tons of green beans per year, while also acting as as source of inspiration and expertise for other farmer groups.

“We planted our coffee trees in 2009 and harvested the first cherries in 2014. Throughout the production cycle, we face different problems. The worst was the frost of 2015, which almost killed our trees. We received material and training, but not enough monitoring and coaching support. In the past, we were often left on ourselves. The market was also not stable: only a few traders, coming on an irregular basis. That is why farmers did not take care of their coffee plantations. 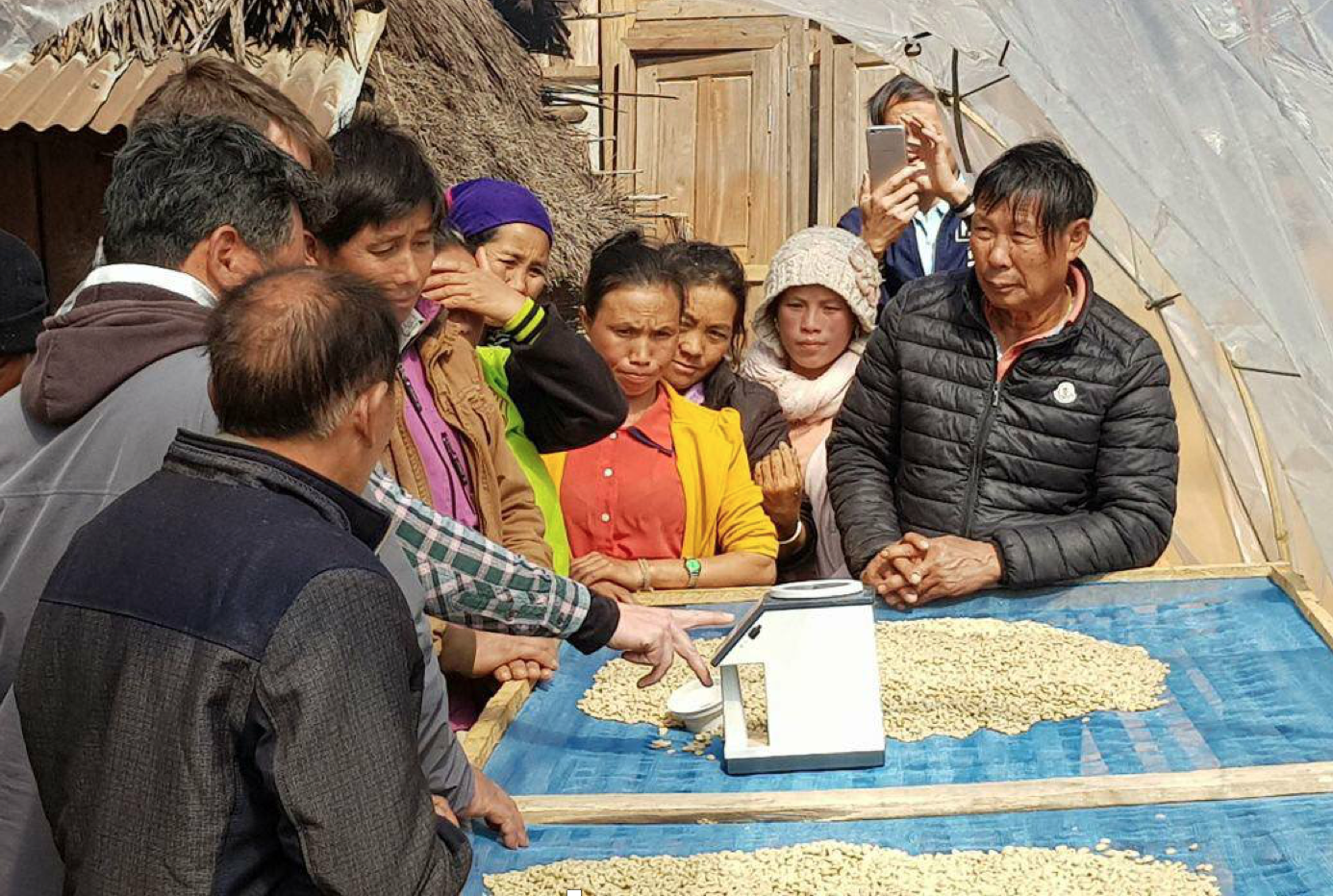 “In 2016, we were introduced to Café Meuang Xiang (a local company) as a potential buyer. We then got support from LURAS to visit the activities of the Coffee Producers’ Cooperative (CPC) in Champasack Province. We learnt a lot from this visit: proper management of coffee trees, how to improve the soil fertility, harvest and processing techniques with a wet processing plant, how to work as a group. We stayed at their homes and we practiced the daily work they did in their coffee plantations. At our return to Xieng Khouang, we could immediately apply what we learnt from CPC.

“Now, working as a group, we can easily manage technical problems and ensure a better quality of coffee. We also developed the capacity to run our community coffee processing plant. Other farmers have now joined our group. We have gained power in negotiating a better price and we are now sharing our knowledge and experience to new members with confidence.” 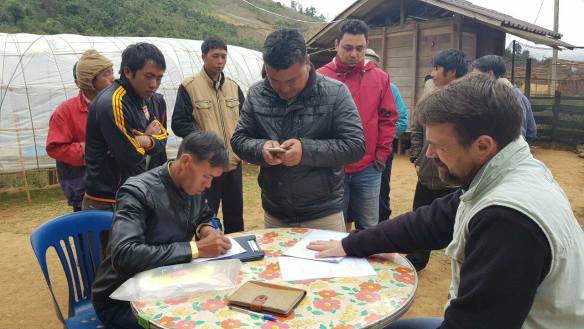 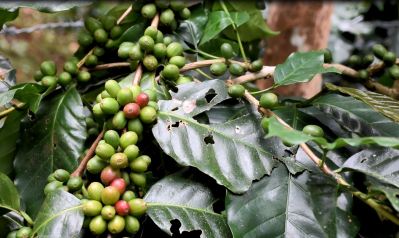 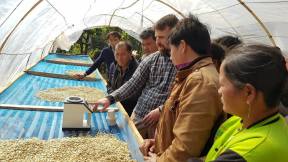 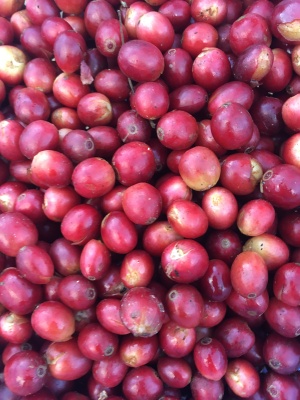 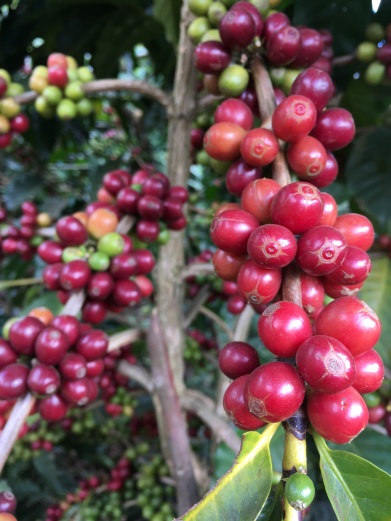 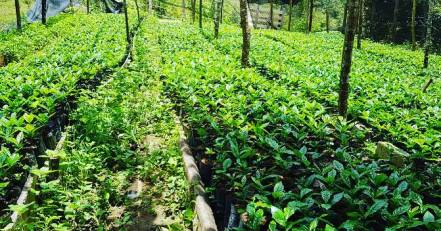 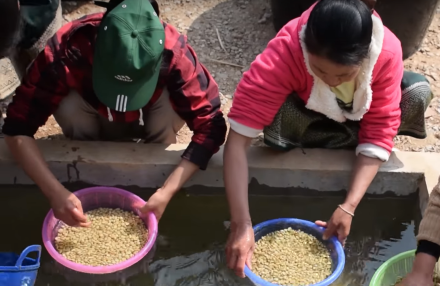 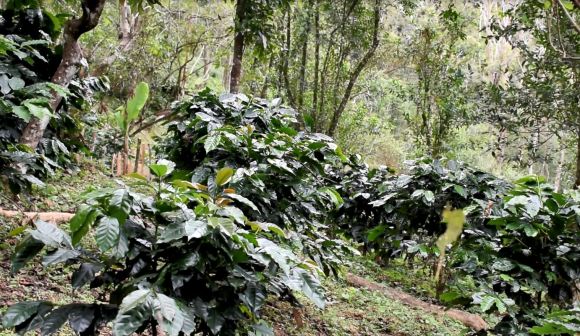 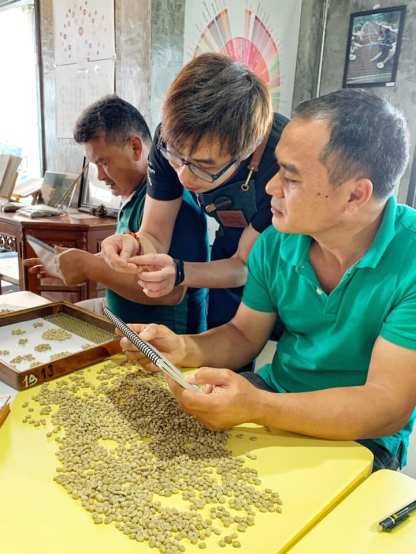 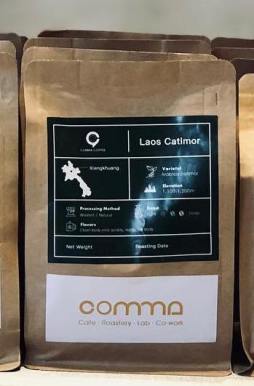 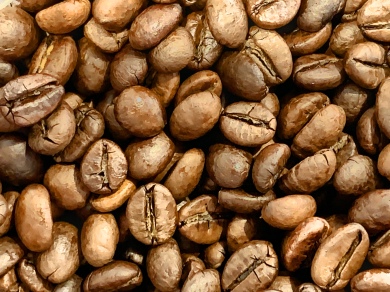 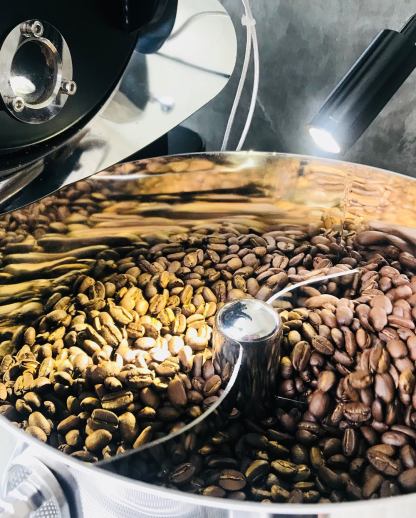 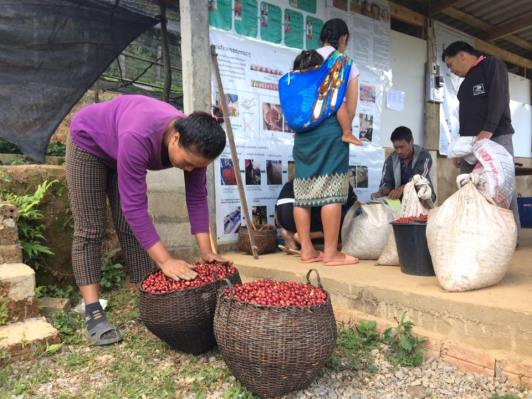 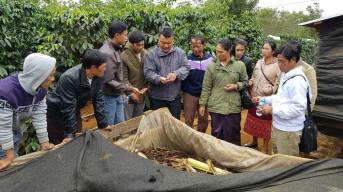 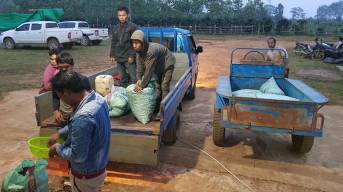 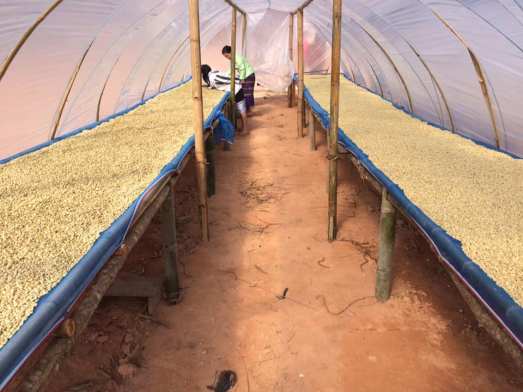 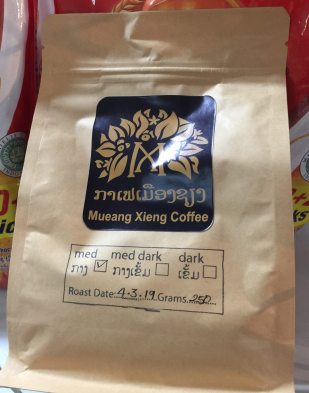 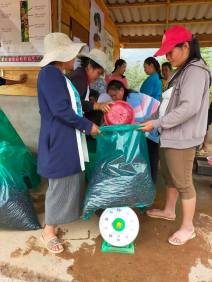 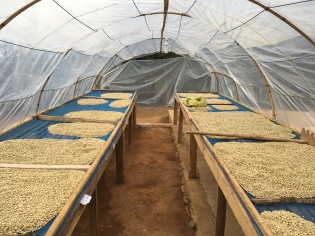 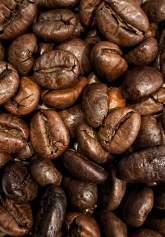 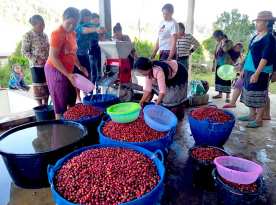 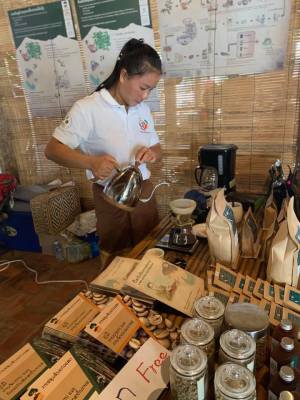 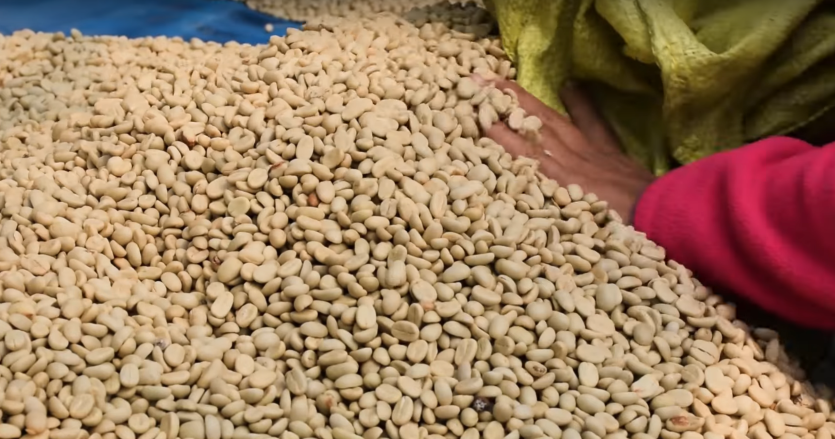